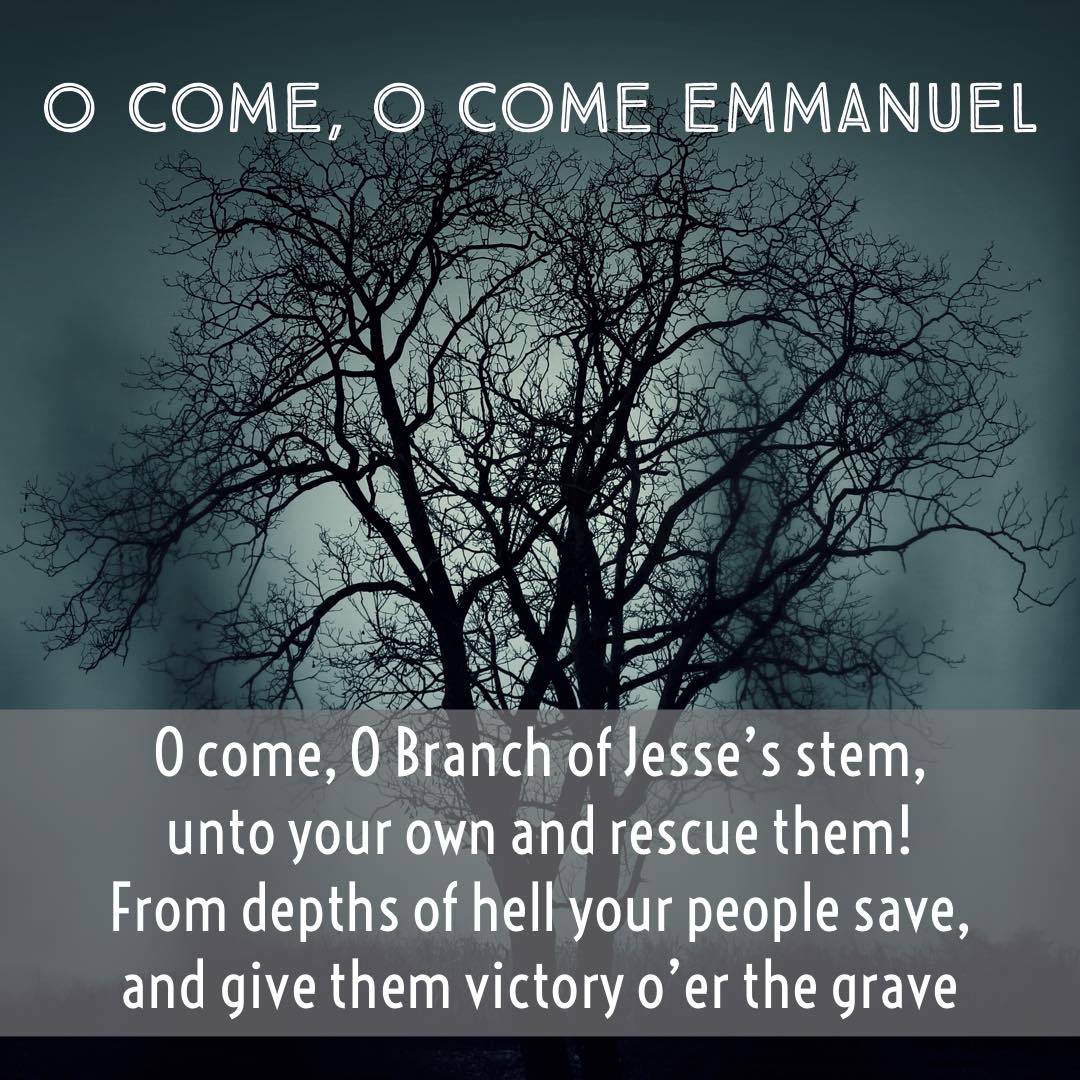 Hope For The Holidays | Day 3

“O come, O Branch of Jesse’s stem, unto your own and rescue them!
From depths of hell your people save, and give them victory o’er the grave”

One of the more hauntingly beautiful of all the songs of Advent, O Come, O Come Emmanuel begins each of its seven verses by using an Old Testament moniker for the coming Christ. Jesus is the fulfillment of every messianic prophesy given to the nation of Israel; from Emmanuel (verse one) to King of the nations (verse 7). While most familiar with the Christmas story know that Emmanuel means “God with us,” originating with the writings of the prophet Isaiah (see Isaiah 7:14) and culminating with the words spoken to Joseph by an the Angel in a dream (see Matthew 1:23). There are, however, less notable titles for Jesus that hold exquisite significance for us all today. Let us consider the fourth verse in the hymn.

O come, O Branch of Jesse’s stem
What is the significance of this archaic expression? In Matthew 1:1-17 and Luke 3:23-38, both Gospel writers trace the genealogy of Jesus through Jesse, the father of King David. What may seem like a boring list of difficult to pronounce names to the modern reader was of utmost importance to first century Jews who were determining whether the claims that Jesus was Messiah were to be taken seriously. As the ancient prophet foretold, “In that day the Root of Jesse will stand as a banner for the peoples; the nations will rally to him, and his resting place will be glorious.” Isaiah 11:2. The “Root of Jesse” expresses the promise of a messianic King who would be born from David’s family line. In Isaiah 11:1, he uses a similar metaphor- “There shall come forth a shoot from the stump of Jesse, and a branch from his roots shall bear fruit.” This picture of a new growth coming from a dead stump indicates that while the Messiah would be from the line of David, He would not be recognized immediately as a king, but rather as an insignificant servant emerging in a time of despair.

For centuries, families and communities of faith have celebrated Jesus as the “branch of Jesse’s stem” through the tradition of “The Jesse Tree.” For nearly 1,000 years, Christians have celebrated the Christmas story through remembering the lineage of Jesus on a Jesse Tree. The first Jesse Trees were depicted through large carvings, tapestries and stained glass window displays, but eventually came to be used more in a familial setting. Tracing from Adam to Jesse fon to Jesus, families and communities of faith recount the stories of different members of Jesus’ lineage by hanging an image or a symbol on a small tree. While it varies from household to household, some Jesse Trees contain 43 ornaments, representing the 43 generations between Jesse and Jesus.
All this serves to point our attention back to the humanity and the humble origins of Jesus. Not only was God with us (Emmanuel), God was one of us (Branch of Jesse’s Stem). For Jesus to rescue us from our sins, He had to become one of us to bear the punishment for our sins.

For nearly 1,000 years, Christians have celebrated the Christmas story through remembering the lineage of Jesus on a Jesse Tree.

Unto your own and rescue them!
From depths of hell your people save,
and give them victory o’er the grave
Jesus is something far greater than a moral examplar or a good teacher. The message of Christmas cannot be captured by good thoughts or good deeds. The coming of Christ was a rescue mission. Jesus entered into humanity, through the bloodline of Jesse, father of David, so that Jesus might become the Savior of mankind. “Joseph, son of David, do not fear to take Mary as your wife, for that which is conceived in her is from the Holy Spirit. She will bear a son, and you shall call his name Jesus, for he will save his people from their sins.” Matthew 1:21. Jesus did not come to make bad people good, He came to make dead people alive!

The coming of Christ was a rescue mission.

As the righteous and devout old man Simeon declared when Mary and Joseph brought Jesus to the temple in Jerusalem, “for my eyes have seen your salvation that you have prepared in the presence of all peoples, a light for revelation to the Gentiles, and for the glory to your people.” Luke 2:30-32. Through Jesus’ birth, God came to man, so that through Christ’s death and resurrection, man might come to God. In His resurrection, Jesus conquered sin and death once and for all, so that we through faith in Him might be set free from the bitterness of eternal judgement (hell) and enter into the sweet victory of eternal life (heaven).

Rejoice! Rejoice! Matthew begins with the promise that through Jesus, Emmanuel, “God is with us.” (Matthew 1:23) Matthew concludes with the promise from Jesus that He will never leave us! “Behold, I am with you always, to the end of the age.” Matthew 28:20